2nd edition of the contest “Seize the Beauty of our planet”

Together for green Earth!

Winners of the 2nd ed. of 'Seize the beauty of our planet' contest announced!

In October 2021 we announced a competition for the best satellite image of the environmental change captured on CREODIAS, WEkEO and CODE-DE - the platforms developed and operated by CloudFerro. Today, we finally know the winners!

From the 9th to 19th of November, the public and the Jury consisting of the representatives of the European Space Agency, EUMETSAT, German Aerospace Center DLR, the Polish Space Agency cast their votes to select 13 satellite images that best show environmental changes on our planet. The first 7 winners were chosen by a popular online vote, the other 6 ones were selected by the Jury.

See the Gallery of all the images approved for the voting phase.

The authors of the three works with highest number of votes were awarded:

All the 13 winners receive a calendar composed of their images and a set of CloudFerro gadgets. 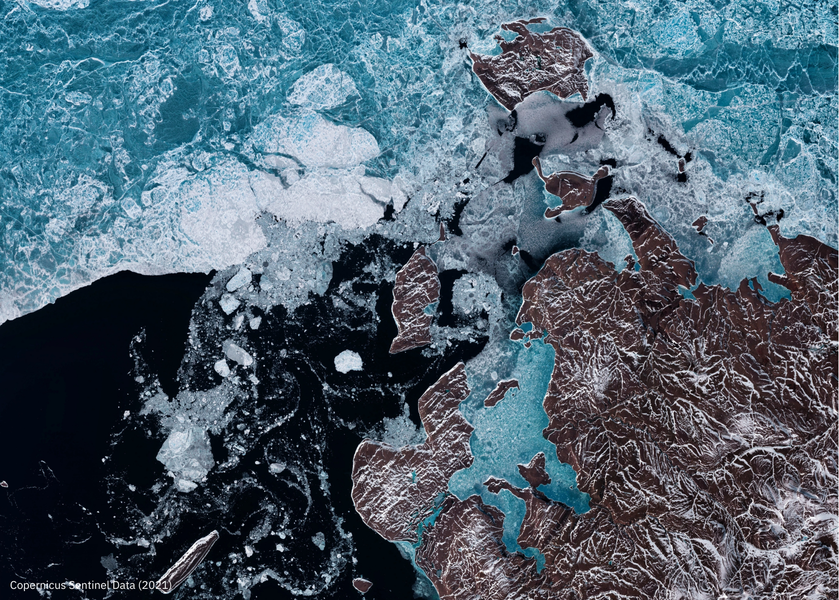 The results of mangroves deforestation, soil flushed after heavy rainfall. 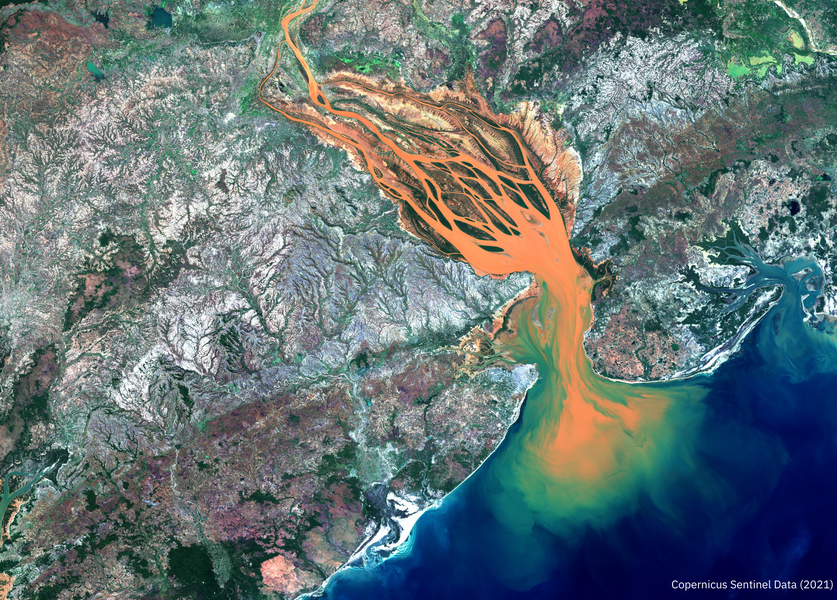 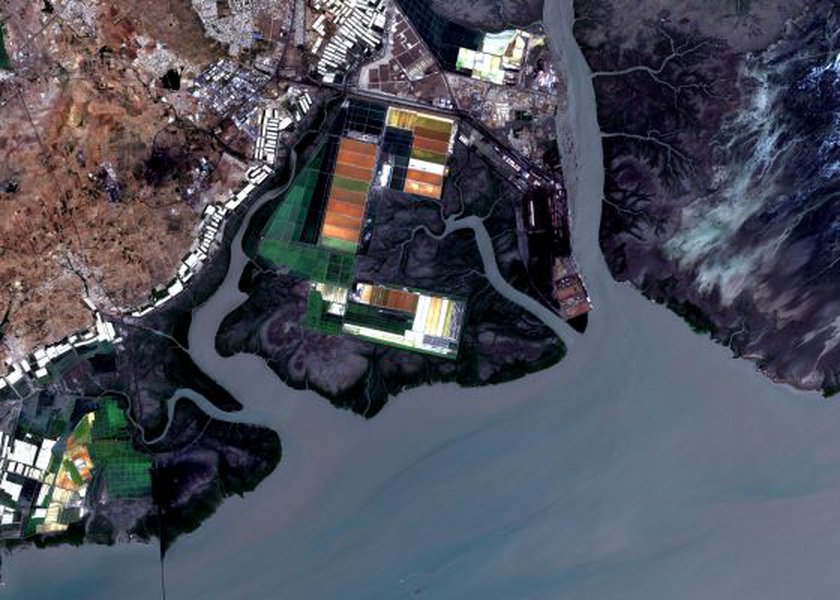 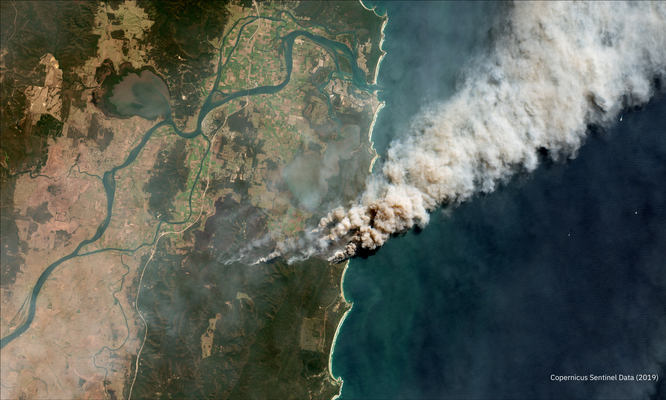 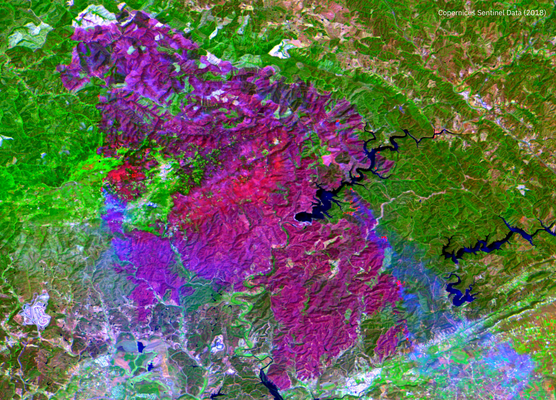 Mass bloom of cyanobacteria in the Baltic Sea by Magdalena Łągiewska

The flowering phenomenon in the Baltic Sea is illustrated in detail by data from the Copernicus Sentinel-2 with a SR of 10m - 26.07.2019, close to the island of Bornholm. Flowering of the Baltic Sea, influenced by the warming climate and human activity. 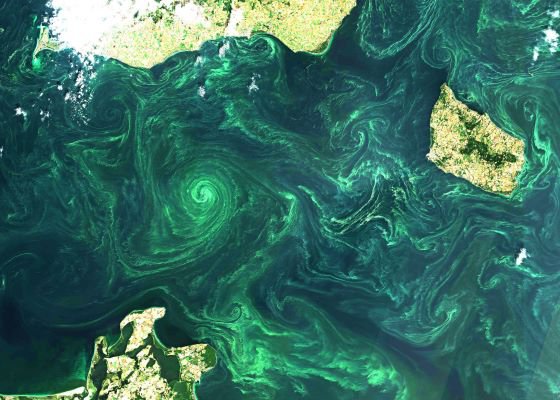 Vanishing of the Aral Sea by Adam Manista

The picture shows the west side of the vanishing Aral Sea (Kazakhstan and Uzbekistan). For 50 years, the Aral Sea had lost 80% of its area. False Color Composition using Copernicus Sentinel 2. 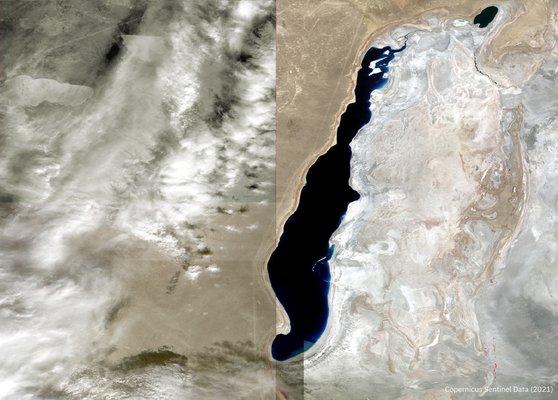 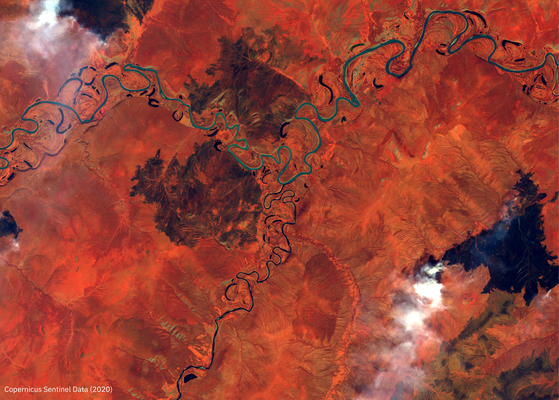 The Floe of Time by David

In the area where the Mackenzie River delta meets the Arctic Ocean, the river, ocean, permafrost, and ice floes interact. The landscape is always in motion, but the rate of change is increasing as climate change results in less sea ice, thawing of permafrost, and increased coastal erosion. 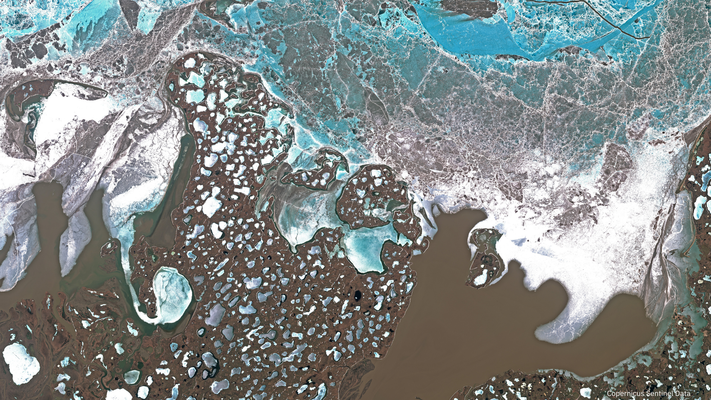 This satellite image shows the melting of Greenland glaciers due to global warming. This glacier is located around north east of Nuuk city (Capital of Greenland) at latitude 64.22 and longitude -50.08 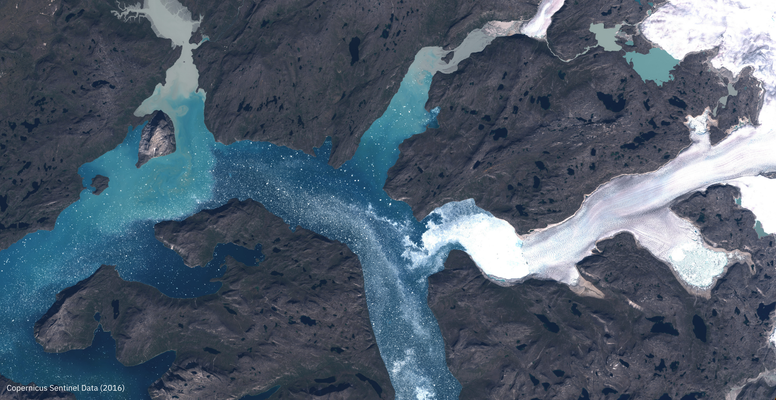 The Baltic Sea is one of the most polluted seas in the world. The formerly clean Baltic waters have become heavily eutrophic over the last century. As a result, massive algae bloom occurs regularly. The photo depicts the turbulence of the bloom in the sea off the coast of Estonia, (2021-08-20). 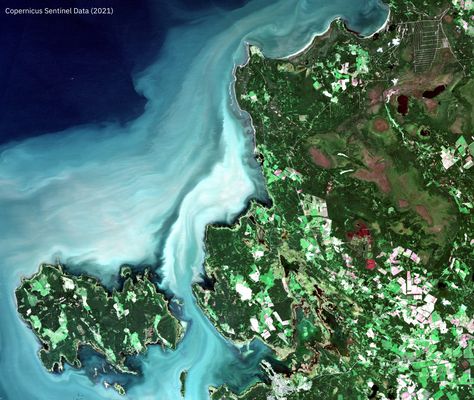 Winter is coming by Patricia

The image shows the city of Madrid (Spain) in early January 2021. As can be seen, the city is covered with snow, which is unusual even in winter. In fact, there had not been a similar snowfall for 50 years. This is a clear example of today's extreme weather changes. 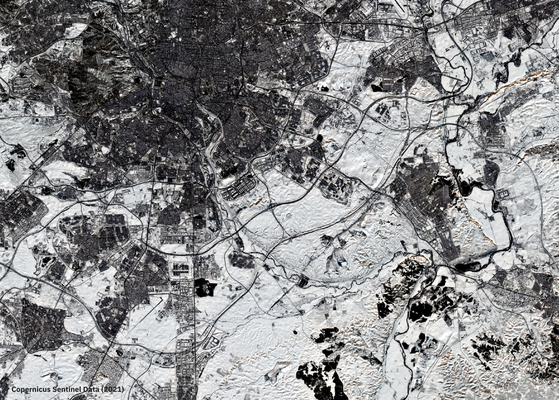 Summer blooms in the Baltic by Karolina Kwiek 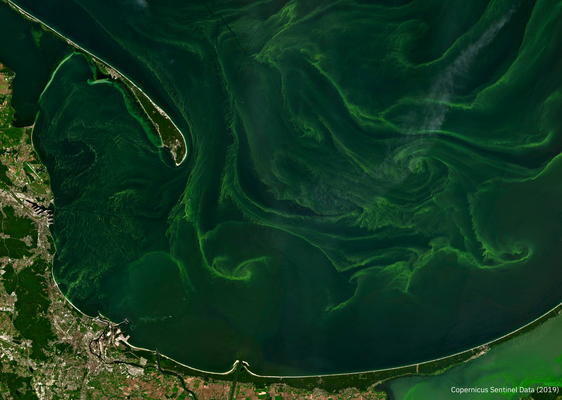 In October we invited you to take part in the 2nd edition of our competition “Seize the beauty of our planet” for the best satellite image of the Earth. This year we have focused on the climate change, the negative effects it causes to our planet and the need to counteract them. That is why, the contest motto is: Together for green Earth!

The unprecedented weather and climate events we are observing now clearly demonstrate that we need to take proper care for our precious home. Wildfires, hurricanes, floods and droughts are direct consequences of global warming caused by unwise actions and negligence, and they are becoming a new normal for more and more communities. With our contest, we want to emphasize how alarming the situation to motivate all the citizens to unite and take a better care  of our planet.

In order to take part in the contest, participants needed to submit ONE image of their choice generated on one of the platforms developed and operated by CloudFerro – CREODIAS, WEkEO or CODE-DE. The images were supposed to demonstrate the consequences of climate change and global warming as captured by satellites in recent years. The images were be obtained on CREODIAS , WEkEO or CODE-DE platform by means of tools available on these platforms (on CREODIAS and CODE-DE - choose: Finder tool, on WEkEO choose: Explore data) and visualized in a dedicated software of your choice.

We prepared a workshop and a short video tutorial How to download EO data using EO Finder at CREODIAS and visualise it in QGIS.

All the submitted images were put to the vote of the general public and a Jury.

The first 7 winners were chosen by a popular online vote. The other 6 winners were selected by a Jury consisting of the representatives of CloudFerro and its business partners. Altogether, 13 images will were selected as winners.

The authors of the 3 images that received the largest number of votes were awarded with attractive eco-friendly prizes. The winning images were published on CloudFerro website and in our calendar for 2022.

See the winning images of 2020 contest.